The President-Elect’s Tax Plan: What the Future Could Look Like

The President-Elect’s Tax Plan: What the Future Could Look Like 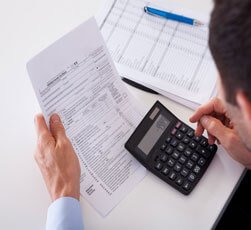 With Donald Trump as the president-elect and Republicans holding a majority in the U.S. House and Senate, GOP tax reform appears likely in 2017. While campaigning, Mr. Trump promised big tax changes. Here’s a digest of the president-elect’s tax plan, according to his website.

The proposed plan would eliminate the head of household filing status, which could prove to be a controversial idea.  President-elect Trump would abolish the alternative minimum tax (AMT) on individual taxpayers.

The president-elect’s plan would cap itemized deductions at $200,000 for married joint-filing couples and $100,000 for unmarried individuals.

The personal and dependent exemption deductions would be eliminated.

Proposed new deduction: The Trump plan would create a new “above-the-line” deduction (meaning you don’t have to itemize to benefit) for expenses on up to four children under age 13. In addition, it would cover eldercare expenses for dependents. The deduction wouldn’t be allowed to a married couple with total income above $500,000 or a single taxpayer with income above $250,000. The childcare deduction would be available to paid caregivers and families who use stay-at-home parents or grandparents to provide care. The deduction for eldercare would be capped at $5,000 annually, with inflation adjustments.

Rebates for child care expenses: The proposed Trump Plan would offer new rebates for childcare expenses to certain low-income taxpayers through the Earned Income Tax Credit. The rebate would equal 7.65% of eligible childcare expenses, subject to a cap equal to half of the federal employment taxes withheld from a taxpayer’s paychecks. The rebate would be available to married joint filers earning $62,400 or less and singles earning $31,200 or less. These ceilings would be adjusted for inflation annually.

Dependent care savings accounts: Under the proposed plan, taxpayers could establish new Dependent Care Savings Accounts for the benefit of specific individuals, including unborn children. Annual contributions to one of these accounts would be limited to $2,000. When established for a child, funds remaining in the account when the child reaches age 18 could be used for education expenses, but additional contributions couldn’t be made. To encourage lower-income families to establish these accounts for their children, the government would provide a 50% match for parental contributions of up to $1,000 per year. Dependent Care Savings Account earnings would be exempt from federal income tax.

His plan would also abolish the federal estate tax. But it would hit accrued capital gains that are outstanding at death with a capital gains tax, subject to a $10 million exemption.

The president-elect proposes major changes to the taxes paid by businesses. Trump would cut the corporate tax rate from the current 35% to 15%, but eliminate tax deferral on overseas profits.

Under the proposed plan, a one-time 10% tax rate would be allowed for repatriated corporate cash that has been held overseas where it’s not subject to U.S. income tax under current rules.

The plan would also allow the same 15% tax rate for business income from sole proprietorships and business income passed through to individuals from S corporations, LLCs, and partnerships, which could cause a significant decrease in tax revenues.

Without getting very specific, the proposed plan proposes the elimination of “most” corporate tax breaks other than the Research and Development (R&D) credit. At-risk tax breaks could include unlimited deductions for interest expense and a bevy of other write-offs and credits.

On the other hand, the proposed Trump plan would allow manufacturing firms to immediately write off their capital investments in lieu of deducting interest expense.

In addition to President-elect Trump’s proposed plan, House Republicans released the “Better Way Tax Reform Blueprint” earlier this year and Republicans in the Senate proposed their own tax plans. These proposals — which in some cases, differ from Trump’s — would make numerous changes to cut taxes and simplify filing. Despite some differences, members of Congress have expressed support for Trump’s plans and have vowed to act quickly.

Democrats in Washington are likely to oppose any meaningful tax cuts, and they can attempt to stall things in the Senate where the Republicans won’t have a filibuster-proof majority. However, the Republicans can use the same procedural tactics that the Democrats used in 2010 to enact the Affordable Care Act. It’s possible that Trump’s tax plan (or parts of it) may pass in the first 100 days of his new presidency. If that happens, we could see major tax changes taking effect as early as next year.

Consult with your PDR CPA advisor on how you and your business can best prepare for these potential changes.